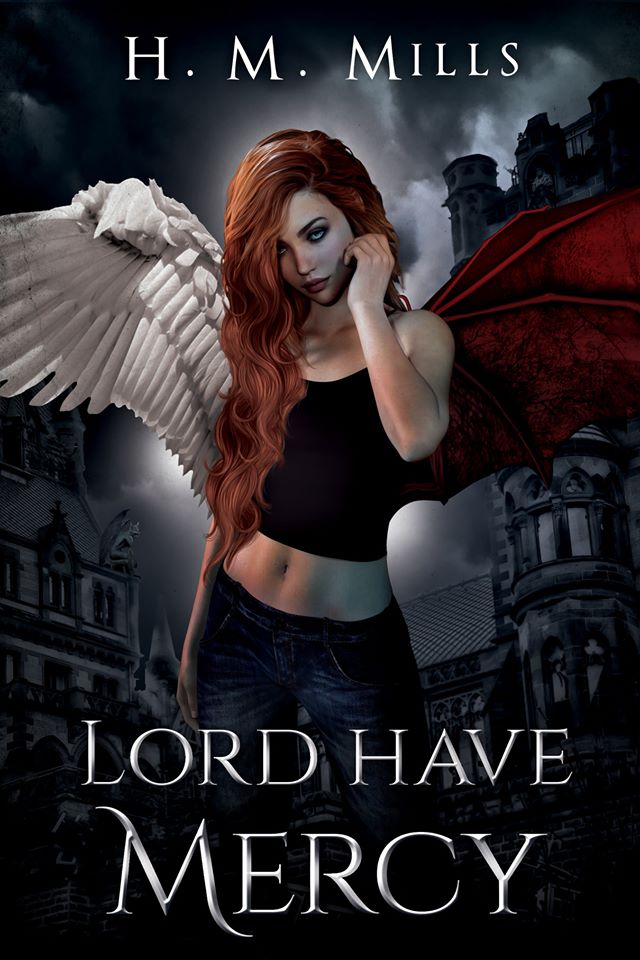 Thank you, Elizabeth Schultz, for the invite to submit to the ‘Authors Lounge’ I am grateful for the opportunity.

When I first started writing Lord have mercy it was about a young girl surviving life’s challenges after the sudden, unexplained disappearance of her parents, but it soon became about her fight to discover who she was and which path she was going to take, the difficult road to healing or the road flooded with pain and rage.

Unknown to Mercy Aymes, she carries the blood of both Heaven and Hell, and a war for domination begins within her, long before she ever becomes the catalyst for reigniting Lucifer’s rebellion.

The Story takes Mercy through what so many of us have suffered in our lives and still weighs heavily on our hearts and memories. Loss, loneliness, insecurity, bullying, teenage hormones, confusion, and self-doubt.

Battling to be a good person is a daily challenge, sometimes hourly, when the piling negativities flood you with hurt and hate. How easy it is to be led by them, and how supporting other pained souls can lead to friendships, love and light, and a fighting chance to beat the darkness.

Mercy Aymes is a half-Demon and half-Angel and the Story follows her from foster care to an unexpected chance to become a student at the Lincoln boarding school, formerly the Lincoln Cathedral, where she not only finds friendships, but driven by bullying, discovers the Lincoln Gargoyles. She becomes intensely attached to one in particular, Talus, and despite him being an inanimate object she claims him as her own and her sanctuary.

When the Gargoyles come to life and Mercy’s hybrid status is discovered, she comes to the attention of the Archangels, Chayyliel and Azrael, who aren’t as sweet and angelic as some believe. With her life now on the line, she’s driven down the road that leads to Lucifer, who’s only too willing to accept her as his own. All she must do is use her Angel blood to open the gates of Heaven and lead Lucifer’s army through so he can take revenge and make God pay for casting him out during the rebellion. Lucifer will place himself on the throne, where he believes he was always meant to be, and Mercy will sit beside him as his Queen.

My own inner battles and experiences really. I’ve lived a lifetime of chaos, with my own truths silenced. My stories give me a voice, and whilst they make perfect sense to me, I hope are entertaining to others, and maybe even some will identify with parts themselves.

I have what has been called a sensory disorder. It has given me heightened senses. For example, touch, pain, taste, colour, movement, and sound can become extremely overwhelming. I have used these experiences in my work, e.g. My memories as a five-year-old touching bricks and stone were so intense it made me cry. A lot made me cry as a child, with everything overwhelming me, but I didn’t have the vocabulary to explain. You can imagine I annoyed my parents and siblings quite a lot 🙂

As a 7-year-old, I fell in love for the first time, but it wasn’t with a human, it was with a stone wall, a stone lion, and an ice river. The intense physical and emotional feelings of falling in love for the first time are what I experience with many inanimate objects, especially stone, but I also experience it with the sounds of cracking ice, and bricks, or rubble tumbling over each-other. Weird I know. 🙂

I think it is for anyone who wants to believe in the unbelievable. Anyone who wants to find comfort when Mortals do not have the ability to provide it. Due to some graphic descriptions of violence and emotive word usage, I personally would not recommend it to anyone under the age of fifteen. I know there is far worse out thereon tv and video games, but this is just my personal preference.

I think foremost, entertainment, and a bit of time out from reality, then maybe a deeper connection with the Story and characters.

I’m still learning the ways of writing, and I’m always hoping to learn more and improve as I go. I also like to hope that my readers will be willing to continue going on this journey with me.

What are your future goals and plans for the book?

Lord Have Mercy is the first in the Mercy Aymes series. My plans are to make it a trilogy and have some standalone books of supporting characters along the way. I have set up their storylines within the main books, so, it’s just a case of writing down what’s already in my head. The sequel, Mercy on Your Soul is about to be released this February, all going well.

I will continue to map out book 3 but, I currently have another standalone book to edit and hopefully release within this year. I also have 3/4 of a book to complete writing that I’m dying to get back to. At the same time, I’m still gathering research for another Paranormal series I’d like to work on. So, there’s a lot to keep me going.

Something more about yourself?

Hmm, this is the question that always stumps me. What does anyone really want to know about me?

I was born in Manchester, England and as a young child I sailed on the SS Australis to Australia. Bought by the Australian government as a family to help populate, and populate we did. I have three daughters and eight grandchildren. I now live in Tasmania, the Island State of Australia.

Though I am a qualified stud manager and have worked in the equine industry, as well as owned my own horses, unforeseen changes to my life, has me travelling down a different path. And so, I continue to live for my family, and now I write and edit every day. This fills me with joy and purpose.