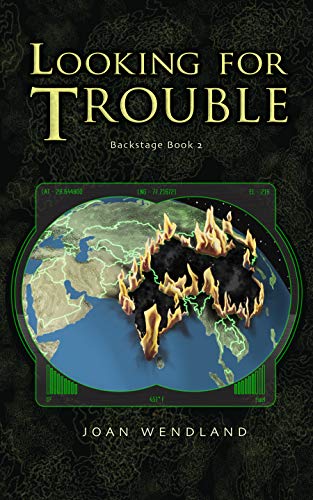 In the first Backstage novel, we are introduced to CC Law – a woman so desperate for work that she joins a secret society for no better reason than a steady paycheck. Little did she know that she would find both her dream job and love there. Then again, where is there? Backstage is far more mysterious than your average secret society. CC doesn’t know who is running Backstage, and she can’t even figure out where it is! CC doesn’t take that lying down though. She will get to the bottom of Backstage come hell or high water.

“Looking for Trouble” continues the story of CC Law – a troubleshooter for the world. She and her team do their best to keep civilization on track, but even with nearly unlimited resources that can be a dicey deal. The first Backstage book introduced CC to the secret society and set for her a variety of difficult tasks, but in “Looking for Trouble” CC is invited to select her next task. In typical CC fashion, she may have bitten off more than she can chew.

This second book was inspired by a series of real world news articles I read about the massive gender imbalances in India and China, as well as the incel problem in North America. It seemed that the evidence of a near future calamity was everywhere, but the problem is so big no one wanted to acknowledge it. “Looking for Trouble” was written to raise awareness and get people thinking about possible solutions.

“Looking for Trouble” was thoroughly researched. If CC and her team read an article – it’s a real article. All the statistics used were correct at the time the book was written. The numbers are staggering with India and China clocking in at millions more men than women. Since both cultures are strict about monogamy for women, their men are growing increasingly desperate. In China that desperation is being expressed as depression, but in India and among the incel community it is manifesting as violence against women. If there are solutions to be had, they will most likely be far outside of the box – which is CC’s specialty!

One would think from the subject matter that “Looking for Trouble” would be unrelentingly depressing, but its genre is actually Hopepunk. CC and her team are all about solutions, and when you work as hard as they do then you need to play hard as well. There’s drinking, gaming, and CC’s favorite pastime – trying to figure out who’s in charge of Backstage and where the heck it’s located. Throw in an epic feud with her brother-in-law and there’s more than enough light material to balance out the serious subject matter.

A third book, “Going Places”, is planned to round out the Backstage trilogy. The full title of the first book is, “Backstage: A Novel of Secret Agendas, Slow Burn Romance, and Imaginary Cats”. Also available from Joan Wendland is “Mr. Darcy: Cogs Maketh the Man” which is a steampunk retelling of Pride and Prejudice entirely from Mr. Darcy’s point of view. Next in the Wendland pipeline is a fantasy novel tentatively titled Splinters of Divinity. All Joan’s novels are available in ebook format on Amazon, and are free to read on Kindle Unlimited at:

Due to the issues the characters are trying to solve, Looking for Trouble contains content pertaining to sexual violence. This book is not recommended for young readers, or people who do not wish to be exposed to the subject matter. Healthy sexual relationships are portrayed as well – romance isn’t dead Backstage!

You can find Joan’s games at: https://blood-and-cardstock.com