For Those Who Dare by John Anthony Miller 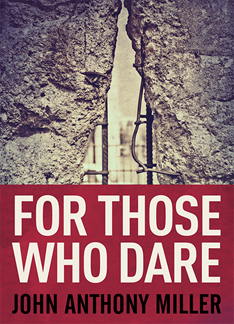 For Those Who Dare is my seventh novel, and I would like to thank Author’s Lounge for giving me the opportunity to present it to their readers and subscribers. I hope they find it interesting enough to warrant a further look.

I write historical fiction and historical mysteries. For Those Who Dare is set in East Berlin in 1961, just as the Berlin Wall is being built, dividing a Communist East Berlin and capitalist West Berlin.

The story is about Kirstin Beck, who lives along the border between East and West Berlin. She is married to a college professor, a spy for Stasi, East German Intelligence. With a grandmother who needs her care, and after finding a daughter given up for adoption sixteen years before during WWII, she must get to West Berlin – no matter what the cost. But as she prepares to leave in the hours before dawn, she finds soldiers closing the East Berlin border with a barbed wire fence strung through the cemetery behind her house.

Tony Marino is an American writer in West Berlin. His apartment abuts the cemetery that the border fence divides. As soldiers patrol the fence, he sees Kirstin at her townhouse window. She holds up a sign for him to see. It states: HELP ME. Unable to ignore this simple message, he risks his life to save hers.

The two men in Kirstin’s life symbolize the governments they represent: her cold, dogmatic husband from East Berlin, rooted to a rigid philosophy that needs walls to contain its people, and Tony, the brash, optimistic American from West Berlin who rescues her from a world she can’t endure.

I decided to write For Those Who Dare because I was intrigued by those who risked everything for dreams of a better life, determined to escape East Berlin regardless of the method – tunnels, sewers, fake passports – and regardless of the personal cost. Many were successful. Many more were not. Although For Those Who Dare is purely fiction, it’s based on fact, inspired by a political system that has failed repeatedly throughout the course of human history, but is continually reinvented with different faces and footprints, as if the muddled masses won’t recognize it and somehow embrace it for all eternity. The stark reminder to which I always return, is that in East Berlin in August of 1961, people risked and often lost their lives to obtain the freedom that most in the world are now so fortunate to enjoy.

The book has done well since its release, enjoying international popularity (Amazon: http://mybook.to/forthosewhodare​) and I’ve done several radio and TV interviews to discuss its different facets – an escape novel, a romance, a statement on Communism versus Capitalism, relevance to today’s political climate, etc.

The book appeals to a wide audience – anyone interested in historical fiction, especially when the backdrop is accurately depicted. It’s also a romance – a touching love story of two people caught in tumultuous times trying desperately to right the wrongs they’re forced to confront. And more subtly, the novel has political insight, a portrait of Communism versus Capitalism.

Now that For Those Who Dare has been released, my future plans are to continue writing. I have three novels in the publishing queue waiting to be issued – which can take up to eighteen months after the book is purchased by a traditional publisher. Since I write quickly, sometimes two books per year, my agent now sells them to several different publishers with varying production timelines.

For beginning writers, advice that was once given to me that I still follow, is write every day – even if you only have twenty minutes, or some time to research or think about what’s coming next. The consistency is important, especially until a draft is completed. And perfection doesn’t come on the first draft – at least it doesn’t for me. I do many revisions. But I think if you focus on writing, and truly love what you’re doing, all else will fall into place.

Anyone interested in any of my other books can visit my Amazon page: https://www.amazon.com/JOHN-ANTHONY-MILLER/e/B00Q1U0OKO/

Thank you so much for having me on Author’s Lounge. I’ve really enjoyed it.