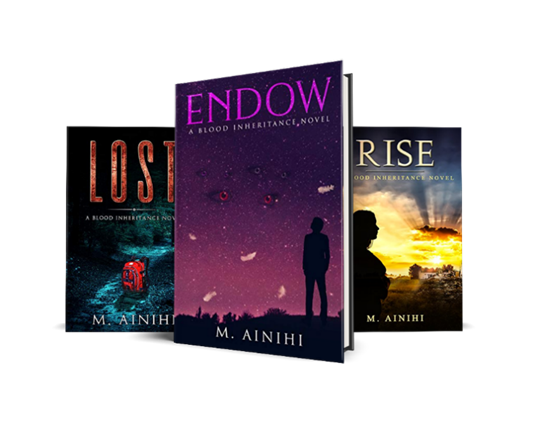 Thank you, Elizabeth and Readers Magnet for inviting me to share my work. The Blood Inheritance Quartet is a series for YA and new adult readers.This dark fantasy adventure is set in the alternate world of Sumir, where mundane humans are oblivious to the existence of the realms that separate them from other magical races. Filled with unique mythology, and interesting creatures, it’s a world not quite like any other.

In the fast-paced introductory novel Rise, our heroine Amanda Garrett,stumbles across a strange artifact in the woods while on a hike with her father. This artifact holds a dangerous secret and she soon discovers that she has unwittingly released Erol, an imprisoned jinni who tells her about the other realms. Her life soon begins to spiral out of control as she becomes the target of a menacing being and Amanda finds herself orphaned, kidnapped, and thrust into a terrifying reality. Faced with difficult choices,she must find a way to embrace the darkness that grows inside of her if she ever hopes to stop the being that has turned her life upside down.

The sequel titled Lost,continues following the journey of Amanda as she sets out to gain some direction and peace by attempting to understand the visions that haunt her. As her path intertwines with that of the shy healer Emily and the brave Kiami who can control humans with her song,the world around the heroines becomes increasingly dangerous. There is a dark power determined to prevent them from understanding the truth, and as the teens get closer to unraveling the mystery, it becomes clear that they will have to learn to work together if they want to survive long enough to figure it out.

Picking up where Lost ended, Endow takes Emily, Amanda, and Kiami, on a dangerous trip through the realms. Their inherited powers could be the key to the salvation of the planet or the cause of its destruction. As long forgotten myths are brought to light, dark secrets will be relieved that will push them to their limits.

With the barriers of the realms threatening to collapse our hero’s must find the missing half-bloods if they ever hope to put end to the celestial’s devious plot once and for all.Resist, will be the fourth and final book in the epic, dark adventure.

I am also working on a short story collection titled,The Warning Signs. This book will feature both dark fantasy and tales of horror, a few of which take place on the world of Sumir.

The Blood Inheritance Novels are available through most online retailers.Visitors to Authors’ Lounge can learn more about my work by visiting my website at http://www.concealedrealms.com or my amazon author page: viewauthor.at/MAinihi. I can also be found on Twitter at @m_ainihi.

M. Ainihi is a passionate independent author and adventurer.She writes in a number of genres, but most of her work is categorized as fantasy or Horror. Hailing from the wilds of Upstate New York, she is currently residing in the Chicagoland area with her husband, two teenage sons, and two rambunctious rat terriers.