Cog in the Machine by Nigel Shinner 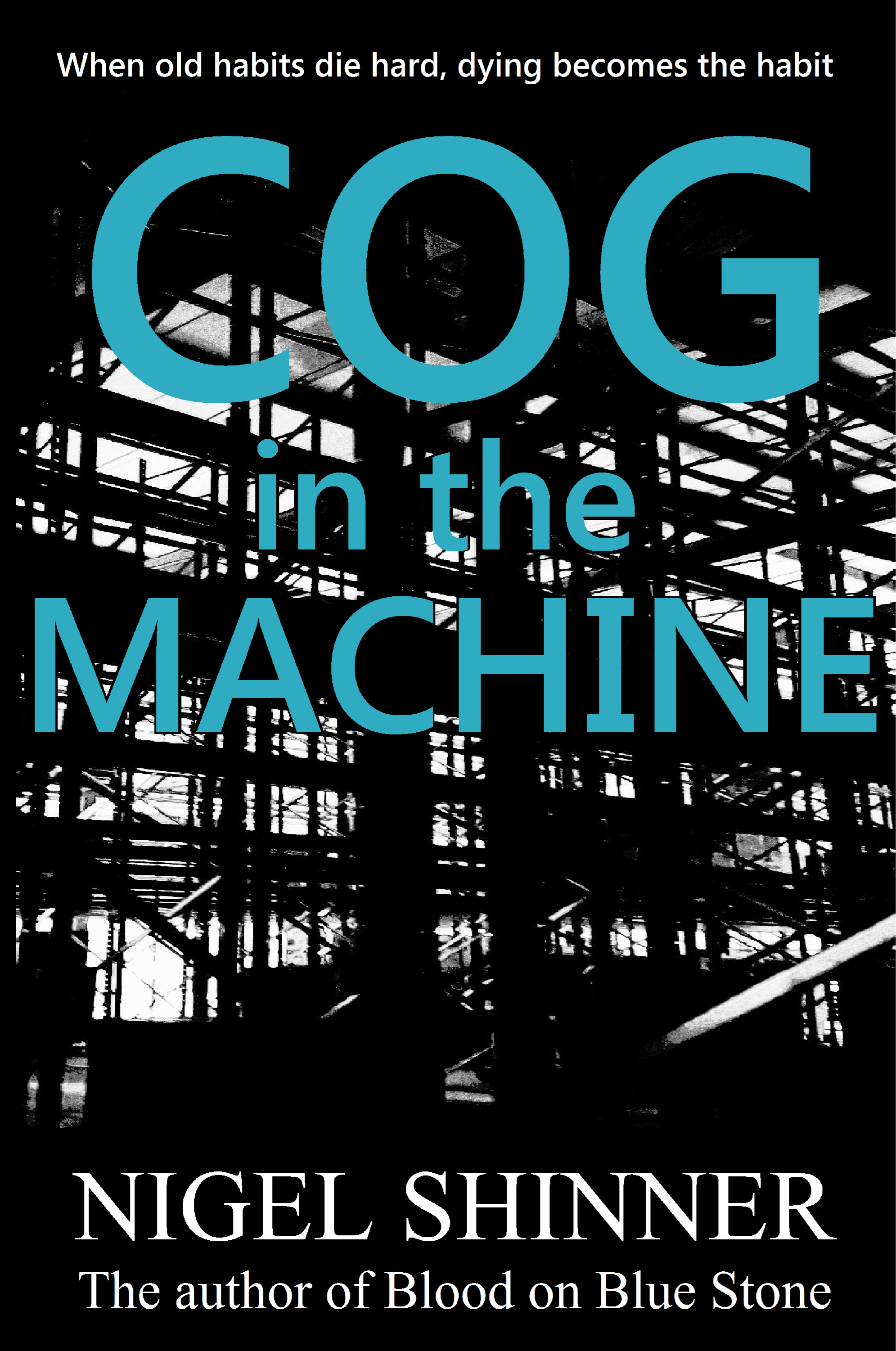 They say everyone has at least one book in them. Apparently, I have a dozen. Maybe more.

My latest outing, Cog in the Machine, is a hard-boiled, fast-paced, no-holds-barred crime thriller. An industry professional once reviewed the book as, ‘The Italian Job meets The Fast and The Furious, on cocaine.’ And I think that’s a fair assessment.

Cog in the Machine follows Dom Carver, a former getaway driver, recently released from prison after twelve years for his involvement in a botched armed robbery. Dom thinks he’s landed on his feet with employment with a machinery importer almost as soon as he arrives back in his hometown. But what looks too good to be true almost always is, and he finds out the company he works for imports more than just machinery. Enticed back behind the wheel, Dom weighs up his options and heads down the path of least resistance, landing him deep in the mire of betrayal and greed. Trapped between two rival gangs who will stop at nothing for criminal dominance, Dom has to employ all his skills to save himself and those most dear to him. Cog in the Machine is brutal, rapid and takes no prisoners. There are twists, there are curveballs, but most of all, nobody escapes unscathed.

The inspiration for Cog in the Machine came from my employment with a machinery importer. Sometimes the ideas just drop into your lap, and in this case, I was powerless to escape the concept for the story. I don’t watch a lot of TV but what I do watch is usually crime related, both true and fictional. I’ve watched many an episode of the ‘Nothing to Declare’ type programmes for ideas on drugs smuggling, which seem to feature in most episodes. I remember watching one where a small box of machine parts – piston heads – had a kilo of cocaine hidden inside the metal heads. The very next day, I was sorting through some boxes of parts and came across some piston heads, which I immediately examined to see how cocaine could fit inside them. I figured there could be easier ways to import larger quantities of narcotics if a criminal was so motivated, and on the very next shelf, after putting away the piston heads, I found a fuel tank. I figured you could fit a lot of drugs into a tank designed to hold 30 litres of fuel. Bingo! Idea spawned.

I hope Cog in the Machine will appeal to crime thriller fans and action/adventure fans alike. The story is so rapid it doesn’t take a breath between chapters. Among my readers have a few serving police officers who enjoy the thrills and spills I subject my characters to, and I imagine there are a few things they recognise from their experiences, and a few things they don’t. Overall, I think Cog in the Machine will tick a lot of boxes for many an avid reader. So far, the feedback has been overwhelmingly positive and I would like to think followers of the Authors’ Lounge would enjoy the type of pacing and intrigue Cog in the Machine delivers.

After finishing ‘Cog,’ I immediately started writing a conspiracy crime thriller titled The Cull. I’m hoping to publish it before Christmas 2021. I’ve also written two other crimes thrillers – ‘Haven’ and ‘Tear Down the Bridges,’ – both could see an audience by 2022. Nothing fills me with more joy than a fan eager for more of my brand of fiction.

But it’s not all about the writing. It’s just mostly about the writing. When I’m not writing, I’m reading or researching; topping up the ideas in readiness for future projects and making sure I have enough detail to spin a convincing yarn. (I’m already plotting a new book.)

Aside from all the book related activities, I also enjoy listening to music, watching movies, and taking long walks on the beaches of my home county, accompanied by my partner and children. Even throughout the craziness of the pandemic, life has been pretty good. And when I write and share my work, life is even better.

Thank you for reading.