Bank on Nothing by Russell Govan 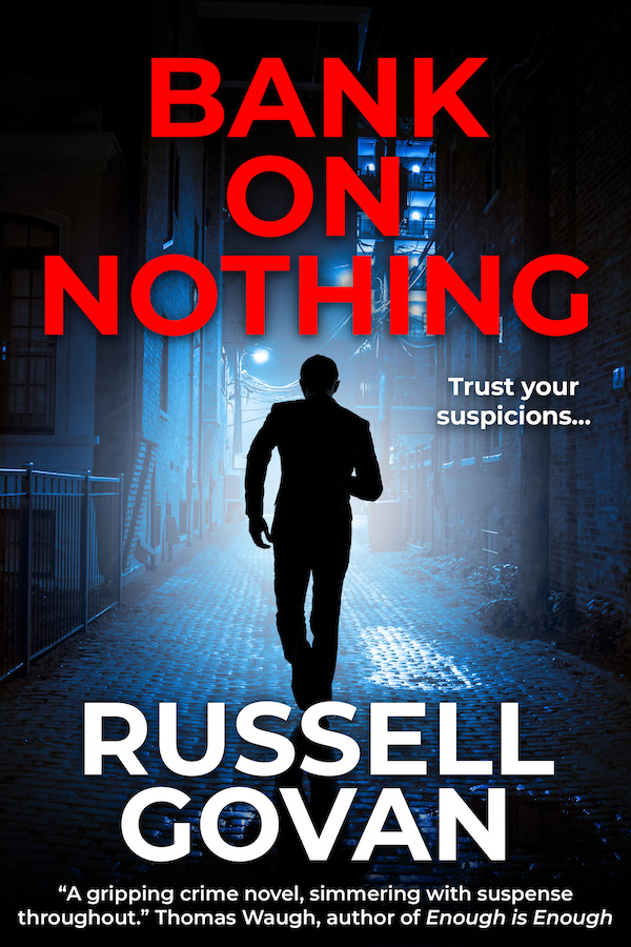 I suspect that I might be the first contributor to Author’s Lounge to say I never particularly wanted to write my first novel, and that I’d rather not have got the motivation to finish it.

I was attending writing classes and the tutor asked each of us to provide three brief ideas for a book we might write. I found it quite easy to generate two that I was enthusiastic about, but struggled to cobble together a placeholder for the third. All the proposals were then circulated and class members were invited to vote for which one they might buy if it were ever published. I was astonished, and not a little disappointed, that my third choice suggestion gained considerable traction.

Afterwards my tutor suggested strongly that, given its apparent commercial potential, I should try to write the story. I have huge respect for my tutor and agreed to give it a go. I struggled to make headway and after the best part of a year I was on the verge of abandoning the project. I was explaining how I felt to my adult son one evening during a phone call. He asked me to talk through the plot, and after a long discussion he told me that he thought I should persevere and finish the novel. Just a few weeks later he died very suddenly and unexpectedly. In my grief I remembered his advice and felt a compulsion to finish the novel as some kind of token of my love for him. And so I completed it, then stuck it away on a shelf.

Freed from the burden of writing something I hadn’t particularly enjoyed, I embarked on writing something I was excited by. After about nine months I had finished what I considered to be a fairly decent time-slip romance, with a bit of edge and humour to it. I sent it to well over a hundred publishers and agents but, despite a number of expressions of interest and a few kind comments, no-one followed through on it.. I then decided to dust off the previous novel and test whether there might be any interest in it, given that the market for a thriller is massively bigger than that for the rather more niche time-slip romance. I sent it out to half a dozen publishers and was amazed when two of them came back within a matter of weeks saying that they were willing to take it.

And so I signed a deal with Sharpe Books, and they published Bank on Nothing for me. It’s the story of a very ordinary man who becomes caught up in the most extraordinary situation. I set it in and around the City of London and the commuter dormitory of Ilford. I was familiar with both having worked and lived there some thirty years ago – write what you know, as I was taught in my classes. The book is available in electronic and paperback format via Amazon https://www.amazon.co.uk/Bank-Nothing-Russell-Govan-ebook/dp/B08FBH9FYK/ At 240 pages, it’s a pretty quick and easy read for anyone interested in the crime/thriller genre.

Getting a book published has been quite educational for me – particularly in seeing the importance of social media in promoting it. I’m quite social media averse, although I do now have a twitter account: https://twitter.com/RussellGovan/status/1308318859330564097

My agreement with Sharpe Books requires me to produce a second thriller and I’m now quite a long way down the road to getting that written. With any luck that should be available later this year.

I have one final piece of good news that I’d like to share. Although I’ve been pretty focused on bashing out my second thriller, I have also continued to selectively send out my time-slip romance to publishers I think might just be interested. This week, in fact on the same day that Author’s Lounge invited me to write this piece, I got word from a Toronto based publisher to say that they wanted to take the book! I hope that provides some inspiration to other authors out there – if you really believe in your book do keep plugging away (and I wish you the very best of luck).