During the Tobacco Wars, Rumford’s own Great-Grandfather, George Washington Kinney, was attacked by “Night Riders,” who also destroyed the family barns and tobacco crop. Rumford’s other Great-Grandfather, George Washington Jett, was a “Night Rider” which brings a family dynamic into this story.  To help prevent history from ever repeating itself, Kinney compiled one of the largest private collections of Tobacco Wars primary documents in the United States. At six years old, Rumford discovered these documents and has been telling his Great-Grandfather’s story ever since.

Born in Louisville, Kentucky, Rumford grew up in Bracken County, Kentucky, and Cincinnati, Ohio, and now resides in Dayton, Ohio.

Imagine a lawless militia of 10,000 masked men roaming the cities and countrysides of the United States.

Brandishing firearms, these “Night Riders” set fire to warehouses and barns, destroy millions of dollars of product, and tear businessmen from their homes to torture them—their revenge against an apathetic One Percent who profit off the misery of the working class.

This is not a scene from an apocalyptic movie. It’s a fact of American history.

The most violent and prolonged conflict between the Civil War and the Civil Rights struggles, the Tobacco Wars changed the course of American history—and America’s economy. So why haven’t you ever heard of it?

In Tobacco, Trusts, and Trump: How America’s Forgotten War Created Big Government, entrepreneur Jim Rumford draws from one of the largest private collections of Tobacco Wars primary documents, as well as his own family ties to the conflict, to show how the United States today is spiraling toward the same chaos that sparked the bloody war between the working class of America’s heartland and the Great Tobacco Trust—and why the Establishment doesn’t want you to know about it.

From Big Business monopolies that triggered financial recessions to the Populist and Progressive movements that enabled Big Government to strip Americans of numerous freedoms, the consequences of the Tobacco Wars could not be more relevant today. 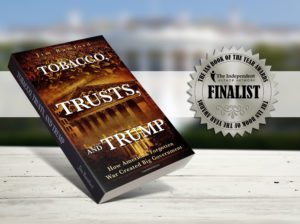