Ark of the Apocalypse by Tobin Marks 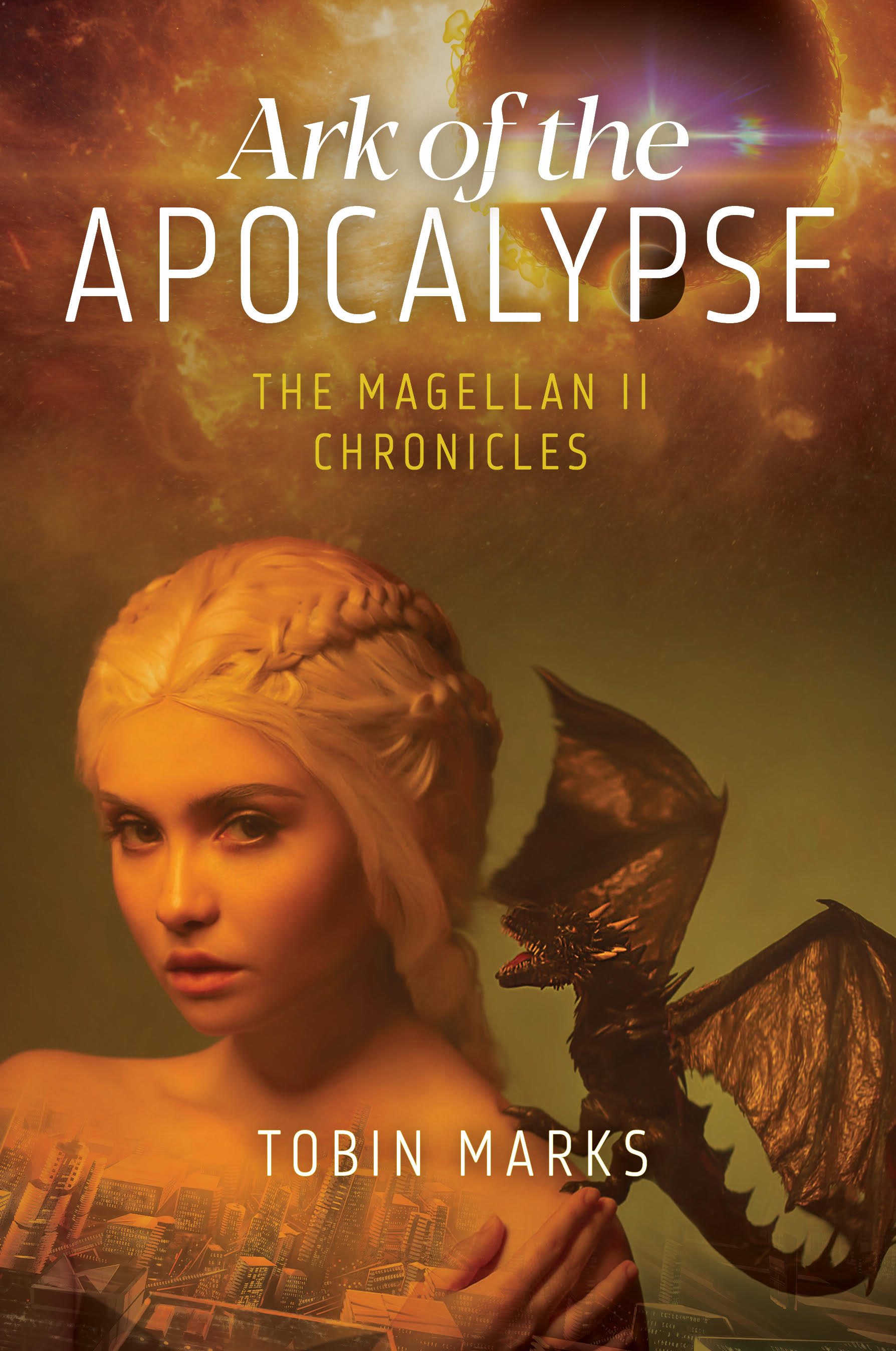 My name is Tobin Marks and I write sci-fi fantasy. I would like to take this opportunity to thank Readers Magnet for this wonderful opportunity to showcase my work on their site. Marketing is always a tough road for writers, and any help is greatly appreciated. Having wonderful platforms like Readers Magnet is huge. I cannot overstate this enough. No matter how good your book is, exposure is almost everything.

So, about my debut book: Ark of the Apocalypse was released in March of 2021. I’ll call it AOTA from now on because it’s easier to write. AOTA had a rather strange road to publication. I had actually written a trilogy called The Hope Prophecy before I wrote AOTA, but held off releasing any of it, even when I thought they were ready. How little I knew. So, even though AOTA was the fourth book written, it was the first to be released. This is because about halfway through the edit of book three in the trilogy, the editor asked for more information of the protagonist’s family. Keep in mind that this is a preternaturally powerful family and their bloodline possesses abilities known as the Path. It’s almost impossible for a member of this family to stray from the Path. Even if they want to. The family legacy is almost a character in itself. Anyway, I told the editor that I couldn’t write the family’s backstory in a chapter or two, and that it needed to be a book all on its own. He said, “OK.”

It was as simple as that. I started AOTA in February of 2017, and finished about May, 2017. As with so many novels, the title changed many times over the course of the getting to release. My first choice was Dragon Watch, then Dragons Watch Forever, then Children of the Last Ark. However, when publisher; Boyle and Dalton got involved, they wanted to see the words Ark and Apocalypse in the title. Naturally the title Apocalypse Ark was the first title I thought of. Even more naturally there are about million books out there with that title. Sigh… So, I settled on Ark of the Apocalypse.

Several things happened on the way to release. First was the inclusion of the publisher and their editor. Previously, I had thought the editor whom I had hired was tough. Apparently, I had no clue. When I sent the manuscript to B&D, I actually thought that the manuscript was ready, and that we’d breeze through the editing process. At the very least I was positive that I’d get at least a B+ or A- when I turned it in. What came back was something akin to a D- and a dunce cap. These are actual quotes: “This is just annoying,” and “I don’t think you’re as funny as you think you are.” Sigh…

But, I was determined, did what was asked, and finally got it. Kinda sorta maybe. Anyway, I guess it sounds as if this was a stressful unpleasant process. In fact, the opposite is true. It was one of the most fulfilling times of my life. The end result is all that matters, and please forgive my saying so, but AOTA turned out to be a pretty good yarn. It became so, because I had an editor who regularly kicked my butt. I guess the whole moral to this is: listen to your editor. Nothing is sacred. Be prepared to chop days, weeks, months of work. In the end, you won’t even remember what got the red pen. Stephen King says that if you want a 100k word book, write 200k. I’m probably averaging 250 to 300k. One last tidbit, and I’ll move onto the book itself. Every chapter, every sentence, every word has impact. Make it so.

When AOTA was released it was simply a set up for the trilogy I spoke of. But like every novel, it took on a life of its own. I worked in a few backstories to flesh out the two main narratives. What I was not prepared for, and what I didn’t see coming was that the main backstory became the main story. As the reviews started to come in it hit me just how powerful this backstory is. It took me by surprise, and was rather sobering to see the effect that mere words can have. My words! It was just a backstory after all. Wasn’t it? But it wasn’t. Not really. In know that now. It touched readers in a most personal way, because all of humanity, every single one of us living today is actually witnessing the effect of global warming. And every year it gets worse. When I wrote it, I thought that perhaps I was being too extreme. That was only five years ago. Little did I know that planet Earth was fast approaching what I had once thought extreme.

The extreme nature of the backstory causes the Earth in AOTA to become politically unstable. It simply stopped raining. And then it started burning. This lack of fresh water directly lead to the confrontation of World War Extinction. WWX. Again, this was written in 2017, and I simply used certain national tendencies to further the story. Again, little did I know that we could very well be facing these same kind of issues at this exact point in time. Naturally, the narrative differs somewhat from our present reality, but I’ve had more than one reader/reviewer DM me, and tell me she found it prophetic. This hit me like a ton of bricks. Another asked how I knew. The fact is, I didn’t. It is after all, just a story. And God help us all if it ever becomes more than that.

My original intent of a backstory was to create an overwhelming imputes as to why humans fled Earth to colonize another planet. That’s what backstories are for after all. And flee they did. They found a watery world inhabited by giant reptiles, hostile aliens, and of course, dragons. I mean, it would be dragons, wouldn’t it.

I once had an agent ask me why dragons? I said, ‘Because dragons are cool.” In spite of the fact that I still believe that whole heartedly, I never heard from that agent again. Be that as it may, the only character to encompass all four books (so far) is a thousand year old, sixty foot long, fire breathing dragon named Rodinya. She has a crusty disposition, eye stinging bad breath, and a heart of gold.

Rodinya is my favorite character and writing her is hugely fun. But then so was Bull, Baseball, Mother Olga, and Yuri Volkov and of course, Nadya.

Now a little about me. I’m 63 years old, and live in Baja Norte, about an hour south of San Diego. It’s the perfect place to write. It’s also the most peaceful place I’ve ever been, and I’ve been pretty much everywhere. For twenty years prior to 2016, I worked overseas, and literally spent half my life in one country or another. Very few of these places can be found on a travel brochure. I’m about to let you in on something that very few people in the world of literature know about. I’m rather reclusive and keep close to the vest. I’m also a drilling engineer. I put holes in the ground that oil, gas, and steam come out of.

As a result of my travels many of the locations described in AOTA, I wrote from memory. Having said that; I’ve never been in the White House, or the Kremlin, or the Great Hall of the People. Thank goodness for Google. Can you imagine how writers wrote scenes about faraway places before the Internet?

This story had been in my head since the 80’s. I can’t even remember how it originated. At the time I was raising a family, and there simply wasn’t time to write. Then in 2016, my kids were grown, I was alone, and I found myself with a lot of time. 15 months as it turned out, and I sat down to write my story. What I didn’t realize before I started was that all I really knew was the beginning, and the end. But somehow it just flowed and everything in between filled in. Some days I’d write 20 hours a day. For months this went on until one day the trilogy was done. Or rather three raw, unedited manuscripts were done.

My first editor was a young grad student just starting out. Can you imagine being a young lady in New York City just trying to survive and one day some dude, who didn’t have a clue and had the nerve to call himself a writer drops three raw manuscripts in your lap? But it was a start. She gave me some of the best advice I’ve ever had, and in turn, I’ve passed her words along to young writers: She told me, “No book is ever ready, even after the first rewrite.” And as it turned out, my manuscripts needed a lot more than one rewrite. Or two. Or three. They needed an editor who would pull no punches. My next editor was just what I needed. The opening sentence of his first editor’s letter said, “This book is not marketable.” Talk about a kick in the pants. But the Taurus in me dug in and refused to give up. He got me to the point where a publisher was actually willing to take a chance. He also gave me some very good advice. He once told me, “If you cock a gun in chapter three, you better fire it by chapter five.” Sage advice, I assure you.

I’ve already spelled out the next editor, and aside from taking no prisoners, he took me to a whole other level and I will always be grateful for all those words, sentences, paragraphs, pages, and even whole (gasp) chapters that got the red pen.

Lastly, I’d like to mention that the sequel to Ark of the Apocalypse has just been released. It’s called Endeavor’s Run and picks up 1000 years after AOTA.